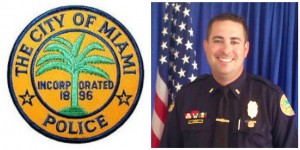 For the past month, Miami’s outspoken Fraternal Order of Police president, Javier Ortiz, has
been relieved of duty with pay thanks to a restraining order a judge granted to a woman he’d
doxxed on Facebook. Tomorrow he’ll rejoin the force after a judge lifted that order and
returned his badge.

“I look forward in continuing to represent the men and women of law enforcement,” Ortiz
said after the judgment.

Danny Suarez, a former CIP member who testified on behalf of Castillo at today’s hearing,
says he’s disappointed the judge ruled that Ortiz can rejoin the force. But he says WhiteLabora
also made it clear to Ortiz that she was disturbed by his earlier behavior in outing
Castillo’s personal information online and ordered him not to harass her again.

“I’m not wholeheartedly disappointed that the injunction was not sustained,” Suarez says.
“I’m impressed that the judge did give him a stern warning.”

Ortiz had been barred from regular police work since March 24, when Castillo obtained the
restraining order. Castillo had been targeted by the union president last February after a
video went viral of her pulling over a cop she says was speeding on the highway. Ortiz posted
photos of her and her phone number to his Facebook page and encouraged his followers to
harass her — an action that broke police rules and earned him a reprimand.

But Castillo claimed the harassment didn’t end there. She testified about Ortiz’s behavior at
an April 21 meeting of the CIP and told the judge that Ortiz had followed her out of the
hearing and then watched her through windows at City Hall, making her fear for her safety.
Judge White-Labora heard testimony today from Ortiz, Suarez, Castillo, and several other
witnesses at City Hall that day and, according to Suarez, didn’t find enough evidence to prove
the union chief had stalked Castillo out of the building. That has been Ortiz’s claim since last
month.

“[The woman’s] latest allegation… is false,” Miami FOP attorney Robert Buschel told New
Times at the time. “There will be at least one high-ranking police official who will testify on
the record that [Ortiz] acted as a gentleman at all times.”

The police union president has made national headlines by calling for a national boycott of
Beyoncé and strongly standing up for police caught up in contentious shootings, including
the case of Tamir Rice, whom Ortiz called a “thug” after Cleveland cops killed the 12-year-old.

About the Author: Chris Lagergren