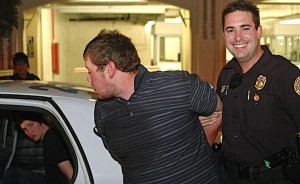 Miami Police Lt. Javier Ortiz, the outspoken head of the city’s cop union, has been temporarily reassigned to desk duty and stripped of his gun, New Times has confirmed. The move came after a judge granted a restraining order to a woman Ortiz allegedly harassed and doxxed online.

“[The woman’s] latest allegation… is false,” Buschel says. “There will be at least one high-ranking police official who will testify on the record that he acted as a gentleman at all times.”

Ortiz, who has repeatedly made national news by defending police shootings and criticizing celebrities such as Beyoncé, landed in hot water after a Tuesday meeting of the Civilian Investigative Panel (CIP), an independent group that considers complaints against Miami Police officers.

The board heard from Claudia Castillo, a Miami woman who said she was harassed and doxxed on Facebook by Ortiz last February after she reported a speeding cop in 2016. Ortiz posted her personal cell phone number and photos and encouraged his followers to call and disparage her. This past Tuesday, the CIP reprimanded Ortiz and said he’d broken department policy by posting her personal information.

After testifying, Castillo said she was worried for her safety and asked for an escort out of the building. Danny Suarez, a former CIP member and city commission candidate, walked her to the lobby. Suarez says Ortiz followed and then peered through several windows to watch Castillo leave.

“She had big concerns that he would follow her, and she didn’t want him to know what kind of car she drove,” Suarez says.

The next day, Castillo filed for an emergency restraining order against the union chief. “Javi was obviously angered by the decision [by the CIP],” Castillo wrote in her restraining order request, “and when I attempted to leave City Hall, he followed me toward the parking lot. Javi was visibly upset and was stopped by several individuals including police officers who were present. I had to be escorted to my car because I was in fear for my safety.”

Miami-Dade Circuit Court Judge Tanya Brinkley granted the motion, which is why Ortiz was placed on desk duty. Department policy states that officers with active restraining orders must turn in their guns and, thus, can serve only desk duty.

A hearing has been scheduled for April on the order, but Buschel says Ortiz intends to fight it before then. “We have no doubt a judge at the appropriate time will rule the proper way on this,” Buschel says.

Ortiz is the biggest lightning rod in all of Miami’s law enforcement community. He seems to revel in making controversial, often stomach-churning statements in public: In the past, he has called Tamir Rice, the 12-year-old boy murdered by Cleveland police, a “thug,” said the shooting of Alton Sterling by Baton Rouge police was “more than justified,” labeled the shooting of Terrence Cruther by Tulsa cops “justified,” and made a slew of racist and Islamophobic comments on his social media pages, including calling Islam a “religion that enslaves and allows the beating of women.”

Ortiz has been sued multiple times for alleged cases of excessive force. In 2011, he was part of a group of cops that tasered an innocent man at Ultra Music Festival; Miami-Dade County prosecutors said a police report he wrote was “inconsistent” with video evidence captured at the scene. (The Miami-Dade County State Attorney’s Office declined to prosecute Ortiz for falsifying a report.)

Jessica Lipscomb contributed to this report.

About the Author: Chris Lagergren